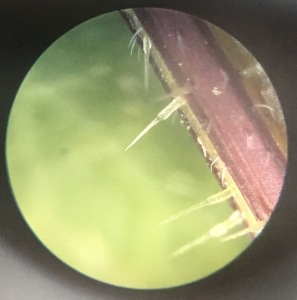 It’s stinging nettle season and, as I’ve mentioned before, my garden is host to an irritating quantity of nettle—quite literally.

But though it is a stinging weed, I’ll admit to a certain fascination with nettle. Look at the stinging hairs (trichomes) under the microscope, and you’ll find beautifully wicked structures like fine hypodermic needles. Those syringes are full of an irritating mix of acetylcholine, histamine, serotonin, moroidin, leukotrienes, and formic acid to irritate your skin.

But the triggering mechanism for the trichomes depends upon turgor (water pressure), so once a nettle wilts, it can’t sting.

And once it wilts, nettle is an incredibly useful plant. It is edible and quite nutritious for both humans and livestock. The cooked greens are used in traditional dishes throughout the Northern Hemisphere where it is native.

It can be used to make a vegetarian rennet for cheesemaking, and is used to flavour and decorate some cheeses. I’ve made nettle rennet myself as a substitute for commercial rennet when I’ve run out.

Nettles can be used to make tea, cordial and beer.

Fed to chickens, nettle is an effective egg colourant, which may explain the deep orange colour of my chickens’ egg yolks at this time of year.

All in all, stinging nettles don’t deserve their bad reputation. Like many of our weeds, they’re useful plants that we’ve forgotten how to use.