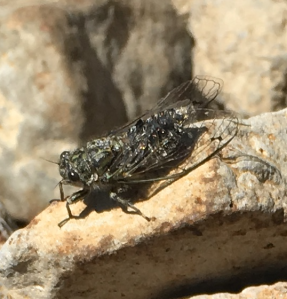 It’s a cicada; it must be summer.

Cicadas are largish, as insects go, but they’re well camouflaged. Usually, you find them by sound. As with most insects, it’s the males that do the singing. The main part of a cicada’s song is made by flexing plates (tymbals) on top of the body. Built-in amplifiers (opercula) pump up the volume to an astonishing level. Cicadas are noisy. I don’t know if any of the New Zealand species have been tested, but the calls of some North American cicadas are over 105 decibels at a distance of 50 cm. That’s nearly as loud as a rock concert (115 decibels). When the chorus cicadas here in New Zealand come out in large numbers, they can be so loud in some places that it’s impossible to carry on a conversation.

Some New Zealand cicadas add an extra feature to their song—a bit of drumming called clapping. The cicada snaps the leading edge of its wings against a branch to make a sharp click. Females also clap, and I’ve read (though I’ve never tried it) that you can call the males to you by snapping your fingers.

There are about 2500 species of cicada worldwide. Because of their size and volume, they seem to be culturally important wherever they live. They are eaten as food in many areas, and sometimes used as fish bait. Growing up, my siblings and I used to collect the shed exoskeletons of cicadas and attach them to our clothing like jewellery. When I lived in Panama, the children would catch cicadas and tie strings to their feet, then carry them like helium balloons, flying on the end of the string.

Wherever they live, they mark the seasons. Here in New Zealand, and in America where I grew up, summer hasn’t really started until the cicadas sing.

Loud singing? Drumming? Must be a summer rock concert! 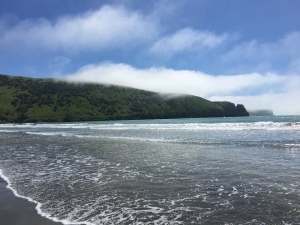 I’m getting better at this. Sort of.

Two weeks to plant out day, and I was able to spend a day at the beach without stressing.

But from the moment I stepped out the door to the moment I returned, I didn’t think about weeds, plants, animals, cleaning…nothing on the to-do list.

I slipped momentarily, sitting at the edge of a wood-chipped playground…There was a twitch plant growing up through the woodchips. I was sorely tempted to reach out and yank it out, but I stayed strong. That weed is still happily growing, though it was a near thing.

Maybe some day I’ll be able to take an overnight trip without stress. Baby steps.

I try to keep a clean and tidy house, but sometimes it’s just not possible.

I was going to dust this weekend, but the first spot I ‘dusted’ was the dining room windowsill. It’s a big window and, for some reason, most of the insects that get into the house seem to end up there when they die.

Next thing I knew, I had a handful of dead insects in a petri dish and was looking at them through the microscope. Most were insects I was familiar with—old friends I was catching up with—but this lovely lady was new. A tiny parasitic wasp, but I couldn’t quite place her family. Several hours, a couple of taxonomic keys, and a stack of entomology books later, I still wasn’t certain, but I tentatively put her in the family Pteromalidae.

Oh, and the cleaning was entirely forgotten.

They’re just midges. If anyone pays attention to them at all, it’s to note how irritating they are when they swarm by the millions, here near Te Waihora/Lake Ellesmere. They are annoying at times, swarms so thick you can’t breathe without sucking in a few.

But there are few adults flying at this time of year. Most are still waiting out the winter as larvae underwater. Midge larvae are fun to look at under the microscope, as their exoskeletons are clear, allowing a great view of the inner workings of their bodies.

Seeing the inside of an insect larva helps one appreciate the job a young larva is tasked with—eat. Eat as much as you can and grow as fast as you can. A larva is little more than a mobile digestive system. The brownish streak you can see running the length of this midge larva is the animal’s gut, filled with the algae and other debris it has eaten. At the tail end, you can see, this little larva is having a poo.

Also at the tail end is a wee snorkel of sorts. These midge larvae can survive in low-oxygen water by sucking air from the surface using their snorkel. The silver lines meandering the length of the body are trachea that carry oxygen to all the insect’s cells.

This midge larva was tiny—about two millimetres long—it still has a while to grow before it’s ready to become an adult. But there are lots of other larvae out there getting ready to emerge with the upcoming warm days of spring.

August is always a month of frustration for me. On the one hand, I’m excited, because spring planting starts, and though the weather might not be the best, there is the promise of spring on its way.

But with the promise of spring on its way is the threat of winter being over. I look at the gardening tasks ahead, feeling overwhelmed and wanting to get cracking on them. But I look back at winter and feel I haven’t accomplished nearly enough while the cold weather lasted. All those sewing projects that I meant to get to, that extra writing I had hoped to do in the long dark evenings, the photographs I meant to print and put into the family photo album…August reminds me that the time for finishing indoor projects is running short.

It’s not that I didn’t do anything over winter. I was busy sewing, knitting, and writing. But there simply aren’t enough winter days for me to accomplish everything on the to-do list. When August comes round, I have to resign myself to not getting things done. I have to prioritise. That photo album? It’s been three years since I’ve put a picture in it. Looks like it’ll have to wait one more year. The jacket I wanted to make for myself will take backseat to the one my son has asked for–he needs it more. The pair of socks I started knitting last winter…well, I still have hope I’ll finish that project.

Half of me is ready for spring. Eager for warm sunny days to whip the garden into shape. The other half of me wants a succession of rainy weekends so I can finish all those winter projects.

The only reasonable thing I can do is make the most of whatever the weather gives me in August. If it rains, I’ll dive into the sewing with gusto. And as soon as the sun comes out, I’ll don gardening gloves and head outside. And if the weather is so fine, it begs for an adventure, I’ll leave everything on the to-do lists for another day.

My daughter needed to visit a few native forests today to work on a science project for school. Darn. I hate it when we’re forced to do that. 😉 One of the places we went to was Woolshed Creek. Though it was a sunny day, places in the shade were quite frozen. In some of those places, the frost was spectacular.

We ran across a patch of ferns with 5 mm ice crystals sprouting off the fronds in such profusion that they looked like they’d been snowed on. A truly spectacular display.

The show only lasted as long as the shade did. As soon as the sun hit, the ice melted. The plants returned to their normal, unadorned state, and the tracks turned to mud. More pleasant, perhaps for us, but not nearly so beautiful. As usual, you’ve got to put up with some hardship to experience the best life has to offer.

Last weekend we were hit by a major winter storm. The weekend before, another storm dropped snow almost to sea level. A third storm is forecast to blow in over the next couple of days.

But John Snow needs to change his tune.

No question about it.

The plants have felt it.

The birds have felt it.

A winter storm dropped nearly an inch of sleet on us overnight. I crunched through the ice in the dark this morning to feed the animals. After emptying sleet out of the chickens’ feed tray and filling it with pellets, I turned and saw, in one of my footprints, a bright green/blue glowing spot.

Bioluminescence. There was no mistaking the colour. I carefully scooped up the bit of glowing sleet and held it in my hand. I could think of no terrestrial source of the glow. There are no glowworms in my vegetable garden, and no bioluminescent fungi. Besides, this was in the ice, not on the ground.

The spot glowed for a moment between my fingers. Then the ice melted, the light went out, and whatever had made the glow dripped to the ground.

I spent an hour online looking for any reference to bioluminescence in snow, and found none. The only explanation I could come up with for my glowing sleet was that a phosphorescent marine creature was picked up in sea spray four kilometres away, frozen, and then deposited in my garden. My stomping foot disturbed it, and it glowed briefly before, most likely, succumbing to a deadly infusion of fresh water.

I was given a tremendous gift this morning. One of those gifts that reminds me to always keep my eyes open. You really never know what you might see. 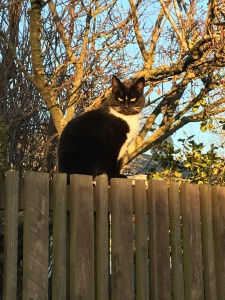 Me: Well, hello little kitty. You’ve got a nice perch there. Can I pet you?

Jedi cat: The fence is empty.

Me: The fence is empty.

Jedi cat: You do not see me here in the sun.

Me: I do not see you here in the sun.

Jedi cat: You do not wish to pet me.

Jedi cat: You want to walk on past and bother a dog instead.

Me: I think I’ll walk on past and bother a dog instead.

The shortest day of the year dawned as it should,
Slowly.
Night wrapped its cold wet embrace
over Earth,
reluctant to let go.

Cloud and Fog conspired
with Night,
spread out
between Sun and Earth,
a blindfold to Sun’s brilliance.

I will give you Fire

Enraptured, Fog did not see
He was being consumed.
Sun turned her eyes to cloud.

The same for you?