Darkness does not fall.
Instead, rises
from shadows grown long
in the evening sun.
Landscape darkens
before sky.
Dark fills up the hollows,
the valleys,
the chook house,
(where birds rustle their feathers
to let the dark settle in close).
Finally, deep night
Rises.
Not too deep–
I can still see the stars.

Just a few minutes before the rain, with the sun still shining.

When I checked the weather forecast last night, it looked promising for hanging out the washing today. Perhaps a bit overly windy, but a dry nor’westerly wind.

Unfortunately, I had to leave the house this morning before it was light, so I wasn’t able to get the laundry on the laundry line. Instead, I hung it on the indoor drying rack, set on the porch.

It was a good thing.

The storm that was forecast to blow in late in the afternoon arrived several hours early.

I had a fabulous view of it from the library where I was working today. The clouds spread out like a spill of hot jam, oozing across the the sky. The leading edge, when it first appeared, was white and smooth, but behind it, the clouds roiled black.

For an hour, I watched the storm ooze toward me. All the while the sun shone bright and warm.

Fifteen minutes before I knew I had to leave to pick up the kids, I decided it was time to make a run for the car. The storm nipped at my heels, and I just had time to get into the car before every autumn leaf on the street was whipped into the air by the first gust of wind.

I drove to the kids’ pick-up spot through a whirlwind of flying leaves and rubbish. By the time their bus pulled up a few minutes later, the car was being lashed by rain and hail.

And the laundry? It wasn’t exactly dry, and some of it had blown off the rack. But I was thankful that darkness had kept me from putting it on the line in the morning.

If you’ve read my blog for any length of time, you’ll know I love jumping spiders. I’m not alone. In fact, I know people who, in general, can’t stand spiders, but who are nevertheless fond of jumping spiders.

I think part of the reason people like jumping spiders is that they are such visual animals. Like us, they navigate their world using visual cues. They turn to watch something pass by. They walk around objects placed in their path. They react to stimuli in a way we can understand.

The other day, a jumping spider on the computer screen began stalking the cursor as though it were a tasty fly. My husband began to play with the spider in much the same way we dangle a string for the cat. It was terribly cute. I know the cat understands it’s a game, but I doubt the spider did. I’m sure it ended up frustrated it couldn’t catch that little dancing arrow.

I should have stayed in this evening and written my blog post.

But the moon was full, the sky clear, and the sea calm.

They called the family out to the beach, where moonlight sparkled on cresting waves. Where the black shadows of driftwood stumps clawed across the rocks. Where waves hissed and foamed up the sand. Where mist clung along the arch of the shore. Where the salt smell clung in our hair and nostrils. Where one single light, far out on the Banks Peninsula, was the only sign we weren’t completely alone on Earth.

So you’ll have to excuse me, for I’ve written no post for today. I have no photo–only my words to urge you out on this moonlit night.

Today was an ordinary Monday. The weather was unsettled–clear before dawn, then overcast, drizzly, clearing somewhat late afternoon. Nothing special at all about it.

Except I couldn’t help but notice today the way the sunlight on the Port Hills highlighted every ridge and valley in bas relief.

I couldn’t help but see the lush green growth of the grass that showed off the lingering oranges and russets of autumn leaves.

I couldn’t avoid seeing that the clouds billowed across the sky in purple, peach, glowing white, and five shades of blue.

I couldn’t help but see the brush fires, flickering yellow, their powder blue smoke rising to form a xanthic smudge across the sky.

Like it or not, the absurd beauty of this place smacked me in the face today. I grinned like an idiot and nearly drove off the road.

Of course, I didn’t get any photos of it. It wouldn’t have done the day justice, anyway.

Not bad, for an ordinary Monday. 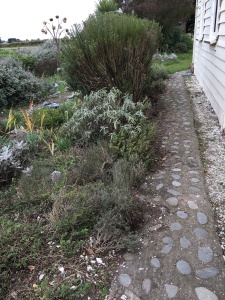 The job had been hanging over me for two years. Every time I went to trim the rosemary bushes by the side of the house, I found them being heavily used by insects and couldn’t bring myself to disturb them. I finally had to admit that there was never going to be a good time to prune them.

So this weekend, when I found I could no longer use the path between rosemary bushes and house, and the bushes were nearing two and a half metres tall, I decided it was time to prune.

Pruning the rosemary is never a fun job—the wood is hard as nails, and every branch seems to need a different size pruning tool than the last one. To make it worse, this time the job took twice as long as it might have, because I checked every branch for preying mantids and mantid egg cases.

I shifted six adult mantids to other plants and collected eleven egg cases by the time I was done. I’m sure I missed some, but I’ve tucked the egg cases into a cage to protect them over winter, and when they hatch out in springtime, I’ll release them back to the rosemary.

A bit geeky? Yeah, I suppose it is. But there was never any question about me being an entogeek. This way, I get my path back, and I get to keep my bugs. Everyone’s happy. 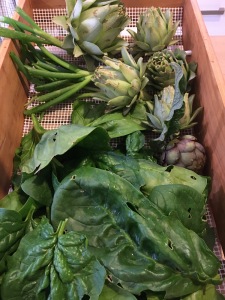 So it was a lovely surprise to find when we first moved here that in Canterbury, the opposite is true. Summer has its green bits, but because there is little summer rainfall, the summer landscape is predominantly brown.

But with autumn come cooler temperatures and more rain. Grass begins to grow again. Plants that were dormant through summer sprout new leaves. Autumn is a time of lush green—a time of life, not death.

For certain, the days are shortening, and the growth won’t last. Soon there won’t be enough sunlight hours to fuel plant growth. But winters are mild, and the green will remain all the way through until spring.

Today I picked a basket of autumn crops for dinner—all in shades of green.

Trig M, where every table has a panoramic view.

Advertising media has been exhorting us to do all sorts of things for our mothers today—buy her flowers, make her breakfast, take her out to a fancy restaurant, buy her diamonds…

We have a rather different take on Mother’s Day at our house.

After the usual Sunday morning routine where I get up before everyone else, light the fire, feed the animals, and bake something lovely for breakfast, we headed to the hills.

It was two hours of uphill slogging to our lunch spot. One of the best restaurants around, Trig M has spectacular views. No need for a reservation, even on Mother’s Day (we were the only ones there). The ambiance was great, if a little chilly today. The thirteen year-old chef made us an excellent lunch of cheese sandwiches and apples, with chocolate bars for dessert.

A lovely Mother’s Day. I hope yours was / is as nice as mine.

I was off today. Scatterbrained, uncentred. I couldn’t focus on a task long enough to complete it. I forgot to hang up the wet washing before leaving the house for the day. I left things at home that I needed to take with me. I grumbled through the day. Everything irritated me.

So when I finally remembered the washing late this evening, I was seriously annoyed with myself–a beautiful clothes-drying day wasted. I snatched up the basket of wet clothes and stomped out the door headed for the shed where the clothes dryer is…

And walked slowly to the shed, letting the cool night and glittering stars bring back my good humour.

Well, you learn something new every day. Apparently, the first Saturday in May is World Naked Gardening Day.

Thankfully, I only learned that fact after I was through with the day’s weeding and mulching.

I suspect that whoever came up with the idea of World Naked Gardening Day didn’t have a garden like mine. I spent my day pulling nettles and thistles—just the idea of doing that wearing less than long pants, long sleeves, and gloves makes me shudder. I also did some pruning. Yikes! Wielding secateurs in the nude? Then there’s the cold. It was one degree Celsius this morning. I was wearing a merino top, a jersey, and a wool hat when I started the day’s garden work, and even so, my toes were numb by morning tea time. Had I been nude, it would have been full-blown hypothermia.

I’ve got no problem with the idea of hanging out in the nude, or playing nude volleyball, or whatever, but gardening? I’ll pass on that one, thanks.