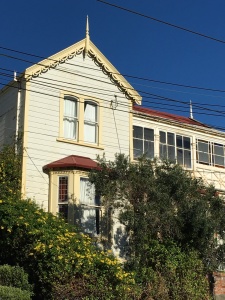 Wellington is a city rich in finial posts.

Finial posts are the ornamentation found on the gable ends of roofs. Roof finials have been used for millennia all over the world. They originally served the purpose of capping the point of a roof, where the tiles come together (think of the fancy post on top of a Japanese pagoda). You need something to cover the unavoidable hole where all the tiles meet. Many roof finials still serve this purpose, but they are also ornamental. 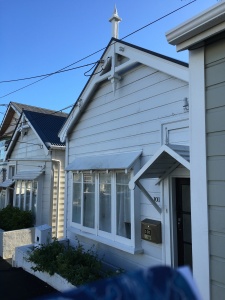 Gable finial posts were popular in the New Zealand villas built between about 1880 and the beginning of World War I. They were just one of the many ornamentations (inspired by the new steam-powered woodworking tools of the time) used in these houses. The style (including the finial posts) was also popular during this time in America and England. Folklore in the eastern U.S. suggests that finial posts were not just attractive, but also prevented witches from landing their broomsticks on the roof.

At this point most of you are wondering why on earth I even notice finial posts. My appreciation of finial posts started when we did a major repair on our own house—a tiny villa built around 1880. The front gable was rotting and in need of replacement. It had been repaired in the past, and in one of the repairs the finial post had been sawn off at the roofline. This is a common fate of finial posts on old villas—re-roofing is much easier without finial posts in the way.

When we repaired our house, my husband insisted on restoring the house’s finial post, and this started a whole-family appreciation of finial posts. Now we can’t go anywhere without noticing good finial posts, or noticing when they’ve been removed.

And so, while in Wellington this weekend, I took several long walks, simply to admire the finial posts.

Of course, the question I have is, with so many finial posts in Wellington, do witches need to land at the airport instead?

2 thoughts on “A Fondness for Finials”