This past weekend was the annual Ellesmere Vintage Club’s Ploughing Match. Our neighbour hosts the event, so we walked down there on Saturday morning to watch the action.

It was slow-motion action. No big thrills or adrenalin. Just the rumble of diesel engines and the smell of freshly turned soil. It was clear the point was a perfectly-turned patch of ground, not speed. There was a lot of starting and stopping, and adjusting of freshly-painted ploughs.

A pair of horses joined the 1940s and ’50s era tractors. Watching them work, it’s clear why tractors have taken over on the farm—there was significantly more fiddling to be done by the horse team in order to perfect their rows.

The demographics of the crowd were predictable. Before we arrived, I commented to my daughter that we might be the only women there. Her response was that she would likely be the youngest person there…by about 70 years. 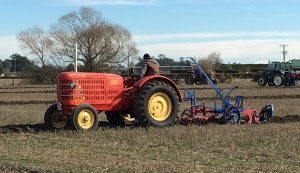 While the majority of competitors were as vintage as their tractors, there were a few younger ones. Two or three other children were there, too, though they were sitting in a car playing on an iPad. And there was a small contingent of women. A few wives watched from the sidelines, and a woman drove the horse team.

It was a true small-town event—25 competitors, and perhaps 40 people in total at the event when we were there. Participants were shuttled to the local hall for lunch on two long benches, set back-to-back atop a flatbed trailer. 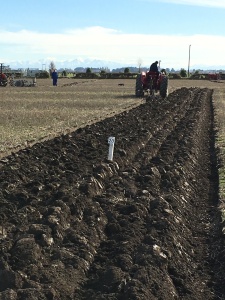 Later, as the event broke up and tractors motored past the house, we laughed—it was hard to tell which vehicles were en route from the competition, and which ones were simply on their way from paddock to paddock. Many of these vintage tractors still get regular use on the farm.

Of course, I have to wonder what will happen as the vintage tractor enthusiasts and their machines age further. Will younger farmers grow nostalgic about tractors from the 60s and 70s as they age? If not, we’ll see a lot fewer than 25 contestants at vintage ploughing matches in future years.