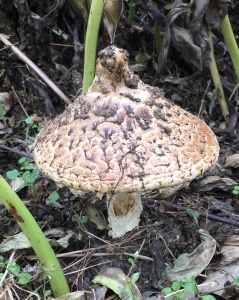 I was working in the garden this morning, and came across this stunning mushroom in the middle of the broad beans.

My first reaction was, “Oh, my! Fairies must have visited the garden.” I wondered if nature was trying to tell me I needed a little whimsy among the vegetables. I began to consider the possibilities. A few fanciful carvings on my trellises? Gargoyles atop the fence posts?

My next reaction was, “I’ve got to show this to my husband.” (He researches mycorrhizal fungi, and this looked to me a bit like an Amanita, which are usually mycorrhizal). He saw it, and said, “Oh!…Oh!…that’s a…no, wait…I won’t say anything until I’m sure…this could be important.”

He did some research and confirmed the mushroom as Noddy’s flycap–Amanita sp. 2–an unusual fungus recorded only from New Zealand, but thought to be introduced, as it is generally found among non-native vegetation. It has never been recorded this far south, and we’ve never seen it on our property before.

Geoff Ridley has written a nice blog post about this fungus and its odd distribution and mysterious origin.

And so, perhaps nature was, instead, telling me to keep my eyes open for scientific wonders, even in my own back yard.

And then, I learned that Noddy’s flycap is named for the Enid Blyton character, Noddy (and his pointy hat).

And at this point, the symbolism of this strange fungus in my garden got really weird. A whimsical-looking fungus of unknown origin, and not known to be present here, named after a character in a middle grade novel?

The message was loud and clear–this fungus has to show up in my next book. Excuse me while I go scribble down some ideas…