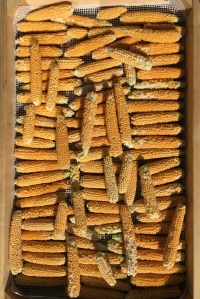 What would life be without it?

Even ignoring the highly processed corn oil and corn sugars found in so many products, what would a movie be without a big bowl of butter-laden popcorn?

What would chilli be without a slab of corn bread to go with it?

What would summer be without corn on the cob?

And then, there’s chicha fuerte…

Um…well…we can just forget chicha fuerte. It’s a corn alcohol brewed in Panama. Tastes a bit like vomit, and even a sip leaves you with a hangover the next day.

But hurrah for all the other forms of corn!

Many thanks to the people in what is now Mexico who bred corn from its ancestor, teosinte, about 9000 years ago! I doubt they had any idea how ubiquitous corn would become, but they hit on a winner.