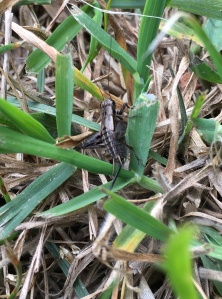 It was like walking through puddles, my daughter said.

There had been no rain.

But the grass was so alive with crickets, they rippled away from every step like splashes of water.

By the time I got there, she had splashed all the crickets away, but I could still hear them. Their little bell-like songs have been a constant background noise all summer, and are particularly loud now, in autumn, when most are adults.

It’s only the males who sing, and they do it by rubbing their short, leathery wings together. The song is fiendishly difficult to locate—it sounds like it’s coming from a dozen places at once, and finding a calling male is all but impossible for a predator. The other crickets are able to do it, though. Males’ calls stake out their territories and attract females.

When I ran the Bugmobile, I used to take crickets to schools, and I always wanted to have a couple of males so the kids could hear them singing. Catching males was a challenge. Not only are they difficult to locate by sound, but if you do stumble across one, it will drop immediately to the ground and scurry underneath the leaf litter like a cockroach. Females, on the other hand, take great bounding leaps to get away, making them easy to catch in a sweep net. I could collect a dozen females in one sweep of the net, but it might take me half an hour to search out as many males.

It was the same story when I went to photograph them for today’s blog post. Males singing all around me, and not one available for the camera. The girls were more obliging. It wasn’t quite like walking in puddles, but there were an awful lot of them hopping around in the grass.