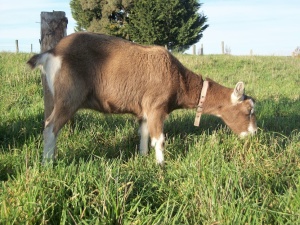 I buried a goat today—Ixcacao, my little toggenburg. Well, I considered her little until I had to dig a hole big enough for her, and drag all 65 kg of her deadweight over to it.

I’ve found that, for most of the goats, digging their graves gives me the time and exercise I need to face the loss stoically. Usually, anyway. But each death is a blow.

There was Hebe, 9 months old, dead two weeks after I bought her. No clear cause. Just dead one morning.

Quickly following her was Hebe 2, four months old, who tore the ligaments in one of her knees. “If she were a rugby player, we’d operate on her, but…” was the way the vet delivered the verdict. I had kidded her myself at the end of a long struggle with three tangled kids. She was weak and couldn’t stand properly for the first few weeks, and I’d hand fed her until she could hold her own against her two big brothers. I held her while the vet put her down.

Hebe is the Greek goddess of youth. I should have known no goat named Hebe would live to adulthood.

There was Demeter, eight years old, who poisoned herself on green acorns, destroying her liver and causing her to waste away. She had always been a sweetheart. I sat next to her in the goat shed, stroking her head while the vet injected her.

There was Delilah, three years old, who wasted away, probably from Johnes disease. She was never particularly friendly, but I sat with her, too, when the vet came to put her down.

Ixcacao, four, went too fast for me to call in the vet. She had been off her feed a bit yesterday, which I attributed to being in season. Now, I think she must have had a tumour—she’d been looking a bit lopsided lately. And I wonder if it had been there in the spring when she delivered a dead, malformed kid. I won’t ever know, I suppose. She gave me no signs of trouble until late yesterday.

As a breeder once said to me, “If you have goats, you have dead goats.” It just goes with the territory, I suppose.

And tomorrow we will get up and carry on with another ordinary day.