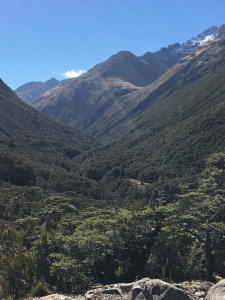 Last Wednesday was a glorious, chilly, sun-sparkling autumn day. A perfect day to climb up over the main divide on the Mingha-Deception Track. The track starts where the Mingha River joins the Bealey River. It follows the Mingha upstream through beech forests to the tussock-covered Goat Pass. On the way, it passes a spectacular hanging valley over which tumbles Kennedy Falls—150 metres tall. Kennedy Falls reminds me of one of the reasons New Zealand is so special. This spectacular natural feature sports no access road, no interpretive signage, no gift shop, not so much as a footpath to reach it. It spills down the mountainside in all its glory, unsullied by tourism. By the time you get to view the falls, you feel you’ve earned the privilege.

Goat Pass Hut, set in a hollow just north of the pass, is a spacious hut which we shared with just one other group of trampers Wednesday night. As we ate dinner, a group of noisy kea flew overhead. Thankfully, they didn’t call in at the hut to tear apart our shoes drying on the porch. About ten-thirty, while we all lay snug in our sleeping bags, great-spotted kiwi began calling around the hut—males and females duetting and answering one another. The great-spotted kiwi is a nationally vulnerable species, with a population around 15,000, and I always feel lucky to hear them in the wild.

Thursday morning saw us scrambling down the boulder-strewn upper Deception River on the other side of the main divide.

Formerly known as Goat Creek, the Deception River got its name in 1900 when surveyor Mr. N. A. Harrop warned engineers building the rail line along the Otira River that the water level in the little river was deceptive—they had no idea how much water could come down the river where it flowed into the Otira River. Three months later, the river flooded and crossed the Otira Valley, damaging the new rail line. It has been called the Deception River ever since.

The day we scrambled down the Deception was one of those deceptive days—the river was lively and powerful, but the water was clear and low enough to cross on foot. Tumbled and scoured boulders left no question about what the river could be like, however. It’s not a place you’d want to be in a storm.

A few hours downstream, we passed a pair of whio (blue ducks) sitting on the rocks preening and ignoring us. Like kea and kiwi, whio are threatened with extinction. There are fewer than 3,000 remaining, so seeing a pair of them was a treat.

The Deception Valley is narrow and steep, with many side streams pouring into the river, often in waterfalls that would be tourist attractions in their own right if they were anywhere else. Old slips, scoured into crumbling cliffs by the river, speak of a landscape in constant motion. A section of the river smells of sulphur from warm springs nearby—a reminder of the intense geological forces that have shaped the land.

As we emerged from the valley onto the wide flat where the Deception meets the Otira river, the deceptive nature of the river revealed itself again. Freshly tumbled rocks lay in drifts on the forest floor, far from the river’s current flow, showing the extent of recent flooding.

We had a glorious two days, with perfect weather, great wildlife encounters, and good company. Definitely a track to recommend.