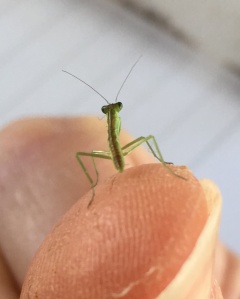 It’s that time of year again! The preying mantis egg case I collected in the autumn is hatching.

Because these mantids were in the warm office for half the winter, they’re early. Mantids in the egg cases outdoors haven’t yet emerged. So they need a little extra care. As the babies emerge, I transfer them to a large tank where they’ll be warm and well-fed for a few weeks while the weather improves. Eventually, I will release most, keeping only a few for use in educational programmes.

I never tire of this annual event. I love watching the newborn mantids stretch their legs and catch their first meal. And I’m always amazed that so many insects can emerge from such a small egg case. The current one, just 15 mm long, has disgorged 35 mantids so far, and only half the case has hatched. The mantids don’t all hatch at once—hatching seems to progress from one end of the egg case to the other over the course of a few days. In the wild, I suspect most of the later hatchlings are eaten by the early ones—it’s a mantid-eat-mantid world out there. It happens in my tanks, too, though I try to minimise cannibalism by spreading them out as much as possible and giving them plenty of hiding spots. I used to raise each individual in its own peanut butter jar, but that gets to be pretty time and space-consuming when there can be 70 mantids in each egg case.

Everyone’s heard the sensational ‘fact’ that female preying mantids eat the males after mating. It does happen, sometimes, in some species, but not as often as you might think. Mantids are creatures of instinct, and one of their most powerful instincts is to capture prey. In fact, this urge is so strong that, even when their digestive system is completely full, and they can’t actually eat anything else, they will continue to capture prey.

So it’s no surprise that a female mantid might snack on her mate, especially since she’s bigger than he is. In species where the females are significantly larger than the males, there’s a higher incidence of cannibalism after mating. Among New Zealand mantids, cannibalism at mating is rare—females are only slightly larger than males, and so the males have a good chance of fighting off the females. I’ve seen this in action in captivity—one of my females had a go at her mate, but he was every bit as feisty as she, and their tussle ended with both alive and unharmed.

My little babies won’t have to worry about mating cannibalism for a while yet, but there are plenty of other dangers out there—other predators, parasites, pathogenic fungi, freezing weather, and careless gardeners all take their toll. Of the maybe 70 mantids that will hatch from my egg case, only one or two are likely to survive to adulthood.

I’ll give my babies the best start I can, and then they’ll be on their own. Watching them now, catching gnats like pros, I think they’re well-equipped.