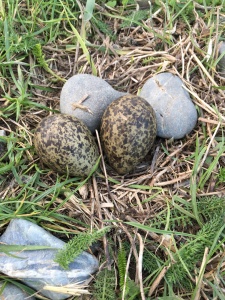 Almost every year, a pair of spur-winged plovers (Vanellus miles, known as the masked lapwing in Australia) establishes a territory in the goat paddock. A few days ago, I was taking food to the goats, and noted where the plovers were making a ruckus at the other end of the paddock.

This afternoon, I took a walk out there. The plovers were nowhere to be seen, and I was worried–they’re not always successful nesters here. There are simply too many predators around our property.

I nearly turned around, but I decided to take a look anyway.

I was rewarded with the perfect plover nest. Two eggs, a little dried grass, and some rocks.

The spur-winged plover self-introduced from Australia in 1932. Since then, its population has grown dramatically. No surprise when you consider it likes open habitat, and is quite happy to set up house in paddocks, parks, and road verges (we once had a pair nesting in the middle of an intersection nearby).

It has done so well since it arrived in New Zealand that its protections as a native bird were removed in 2010 due largely to the problems it was causing for aircraft (airports are lovely habitat for it). It is one of only two native birds to not be protected under the Wildlife Act (the other is the black backed gull).

I enjoy the plovers. I love their harsh night-time cry, and their indignant posturing while defending territory and nest. I love the fact they cheekily nest wherever they want and expect everyone else to stay out of their way.

I’ll be watching these eggs closely. Fluffy plover chicks are even more fun to see than plover eggs.