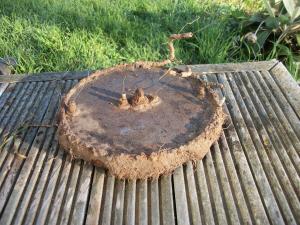 Digging in our yard is an archaeological adventure. A hundred and thirty years of rubbish deliberately buried or accidentally lost is hidden under the sod.

Our little acre and a half was separated from a large sheep run in the mid-1800s and used as a Council gravel reserve—the braided rivers that crisscrossed this area over the past 20,000 years left a rich lens of rocks here. The pit and hill of the quarry are about the only relief we have on the property.

Then the property was freeholded, and a house was built (which we live in today). There came a succession of mostly poor and often strange owners. There has never been rubbish pick up here (not even today), so much of the trash produced by early owners was buried on site.

There was once a woman who appreciated cosmetics—the little glass pottles that held face cream and powder attest to her taste.

Somebody made a homemade handle for a knife, then dropped it while building the ablutions shed (now our bathroom).

More than one pitchfork was either discarded or lost. The head of one now acts as a convenient set of hooks in my garden shed.

Then there were the brothers who brewed moonshine. According to the more senior neighbours, who were just young’uns at the time, these two each had their own brew, and neither wanted to share with the other. So they hid bottles all around the property. Under the floor of the calf sheds, under the house…the brown bottles were everywhere when we moved in, their lids rusted away, hoarded moonshine long gone.

There are crockery and cutlery, wire and chain, hinges and gate pins, cow bones and tomato sauce bottles…Dig a hole just about anywhere and you’ll find all the debris of a rural property.

Usually we can identify the items we find—our lifestyle isn’t much different from the former inhabitants, and many items are familiar.

Occasionally we come across something we don’t even know how to begin to identify, like this strange metal disk sprouting wires. Our little archaeological mysteries—glimpses into the more obscure aspects of our predecessors’ lives. These items ultimately end up in our local landfill—maybe some archaeologist excavating the landfill in a couple of hundred years will know exactly what those things are.