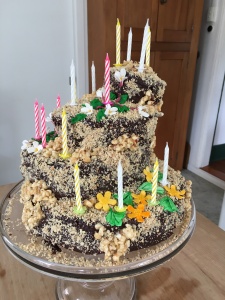 It’s birthday cake season again! This year, my daughter’s brief for me was a Kura Tawhiti bouldering theme, with ‘maybe a climber and some alpine plants’ done in chocolate and hazelnut flavours.

I think both of us had a vision of a grey boulder or boulders with climber, plants, etc. But as I started in on the cake, the vision changed.

I made one of my favourite devil’s food cake recipes (from Tartine) in a range of round layer sizes. I sliced each layer in half and filled it with my homemade Nutella, stacking the layers in a wonky boulder-like shape.

Then I stood there and contemplated the decoration. My plan had been to make the standard quick icing I use for decorating, but the amazing rich chocolate cake with decadent Nutella filling really needed something better than quick icing. It needed ganache.

So that’s what it got—chocolate ganache covered with ground hazelnuts to get a more appropriate boulder colour.

I added chunks of hazelnut praline for a more rocky appearance, and made some alpine plants and a climber from Mexican paste. A few small final touches with a simple sugar and milk icing, and the cake was finished.

It didn’t look anything like I thought it would when I started, but it tasted absolutely divine! No wonder—it contained over 400 grams of chocolate, two cups of hazelnuts, and a gloriously unhealthy quantity of butter and cream. In the end, no one was paying much attention to the look—we were too busy oohing and aahing over the taste.

A while back, I mentioned the Nutella I’d made, and noted it wasn’t quite right, so I’d have to try again.

Well, the most recent attempt, modified based on the shortcomings of the last batch, was a winner. I increased the hazelnuts and decreased the chocolate, so the nut flavour was more dominant, and I used a dark chocolate with a lower cocoa content, which prevented the spread from setting up like a rock when cool.

Spread hazelnuts on a tray and roast approximately 10 minutes at 180ºC until fragrant. Rub off the skins and allow to cool.

Chop the chocolate and melt over simmering water. Allow to cool.

Grind the nuts in a food processor until they form a paste. Blend in the oil, sugar, salt and vanilla. Add the chocolate and blend until smooth and well-mixed.

The mixture will be quite runny, but will set as it cools.

Of course, I’ll almost certainly tweak this recipe more. Just a touch less sugar and a touch less salt next time, perhaps. And I still haven’t achieved the silky smoothness of commercial Nutella—no matter how long I grind the hazelnuts, they still lend a gritty texture to the spread. It would be a whole lot of work, but I might try using a mortar and pestle on the nuts next time, to work on the texture issue … 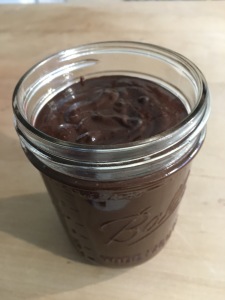 A few weeks ago, my dentist rang. not to tell me I was overdue for a checkup, but to ask if I wanted any hazelnuts (we have a long history of trading produce—I try not to arrive at an appointment without some gift from the garden).

Turns out his hazelnut gift was 10 kilos of nuts! So I’ve been using hazel nuts in everything lately. And, of course, my thoughts turned to homemade Nutella.

There are plenty of recipes online. I chose this one and had a go. The only change I made was to use dark chocolate instead of milk chocolate.

The result was quite good, but not nutty enough for my taste—the chocolate to nut ratio was too high, swamping the flavour of the nuts. It also set too hard—probably because I used dark chocolate instead of the milk chocolate called for in the recipe.

Of course, that means I’ll just have to make it again … you know, to get it right. I have plenty of hazelnuts.

If at first you don’t succeed …

I like the idea of the now-ubiquitous protein balls/energy bites/bliss balls/whatever they’re called. I thought they’d be great for my athletic daughter, to keep her weight up.

But when I bought some, we found them more candy bar than energy boost—overly sweet and not particularly tasty, either.

So I was intrigued when I found the book, Energy Bites, by Christine Bailey in the cookbook section of my local library.

My excitement quickly turned to disappointment as I flicked past recipe after recipe that included such hard-to-find ingredients as xylitol, yacon syrup, matcha, colostrum powder, and lucuma powder. Surely, one should be able to concoct a not-too-sweet high-energy treat from ingredients I already had in the cupboard.

I pulled out my food processor and started dropping things in and buzzing them until I had a mixture of the right consistency and flavour.

The result was bitter with chocolate, rich with nuts, and just a little zingy with salt and cayenne. A definite improvement over the store bought ones, and easy to whip up with staples from my cupboard.

I wanted to bake brownies the other day. I had my heart set on my usual brownie recipe, with chocolate chips and walnuts added.

But when I went for the cocoa, there was none. Oh no!

But there was a large bar of really nice dark chocolate … I used the chocolate instead.

Then, we were almost out of walnuts. Darn!

Dried raspberries. When we dried them, I had no idea how I might use the crunchy little nuggets that resulted.

Now I knew exactly what they were for. I tipped the whole jar into the brownie mix, along with a generous quantity of chocolate chips.

The result is the most divine brownie I think I’ve ever made. The high-quality dark chocolate makes the bar decadently rich, and the dried raspberries provide sparkling, intense bursts of fruit flavour that lingers long after the last crumbs are eagerly licked off the plate.

Lucky thing I was out of cocoa and walnuts! 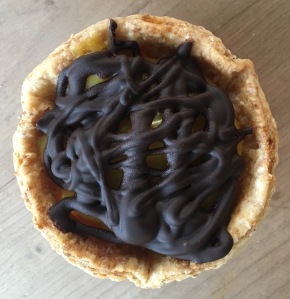 The Darfield Bakery is a mandatory stop for us whenever we pass through Darfield.

Our most frequent purchase is neenish tarts—little lemon tarts with chocolate drizzled on top. I’ve had neenish tarts from other bakeries and none stacks up to Darfield’s.

Not all neenish tarts are lemon—my understanding is that the ‘traditional’ neenish tart (they originated across the ditch in Australia) has a gelatine-thickened cream filling and is topped with two colours of frosting. I’m not particularly fond of this overly-sweet, bland tart. Lemon neenish tart filling is made with lemon juice, icing (powdered) sugar, and sweetened condensed milk.

Make your favourite pie pastry (enough for a one-crust pie). Roll out thinly (roll more thinly for little tarts than for pie, or you end up with a tart that’s all crust), and cut into 10 cm (4-in) rounds. Line the wells of a cupcake pan with the rounds. Bake the shells empty for about 15 minutes at 190ºC (375ºF), until the edges are nicely browned. Turn out of the pan and cool on a wire rack.

While the pastry shells are cooling, make lemon curd. Combine in a saucepan:

Heat over medium heat, whisking constantly, until thick. Remove from heat and stir in 1/2 tsp vanilla.

Spoon warm lemon curd into each shell and allow to cool.

Melt about 50 g (2 oz) dark chocolate and drizzle over the tarts. Allow lemon curd and chocolate to cool completely before serving. 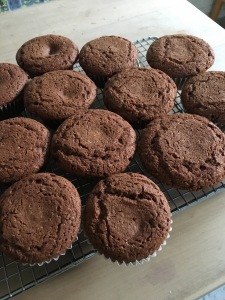 But some leftovers are always nice.

During crazy cake season, I make a lot of icing, marzipan, and other special items for decorating cakes. Invariably I make too much–after all, I don’t want to run out in the middle of decorating a cake.

Some leftovers are eaten as-is–meringue mushrooms were a huge hit one year, as I recall, as were chocolate leaves.

Other leftovers need to be incorporated into something else to be enjoyable. This week I had a lot of marzipan leftover. Marzipan is okay on its own, but it’s much better with chocolate.

I rolled the leftover marzipan into 24 little balls, and placed each ball into the middle of a chocolate cupcake. The presence of the marzipan flattened the cupcakes (and made little belly buttons in some), but the chocolate-almond combination is excellent.

Best leftovers I’ve eaten in a long time. Now, if only I could justify eating them for lunch… 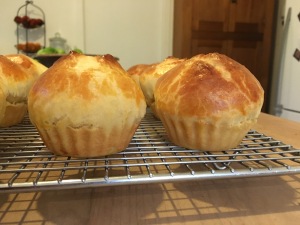 I’ve been threatening to make brioche for some time. Last time I made it was about seventeen years ago.

Not that I don’t like brioche–I love it–but I reckon that’s about how frequently one should eat it if one wants to live to a ripe old age. Three eggs provide most of the liquid, and 175 grams of butter give it that unbelievable silky texture. The butter and egg also make the dough incredibly sticky and difficult to work with, so it’s not something to make every weekend.

A cool, drizzly evening and the promise of a rainy day today made Sunday morning decadence sound like a good idea. I made up the dough after dinner Saturday and left it in the fridge overnight. This morning, it was a simple thing to roll balls of dough around chunks of intense dark chocolate and spoonfuls of sparkling red currant jam and pop them into little tart tins.

Half an hour later, these gorgeous little buns emerged from the oven. They were every bit as good as I remember them being seventeen years ago.

It may be another decade or two before I make brioche again, but something that decadent doesn’t need to come around too often. The memory is just as tasty as the real thing.

Before baking–moons in the night sky. How romantic!

I had to bake on the equinox. Something to celebrate the season, and the coming long nights.

I had some marzipan left over from recent birthday cakes, so I made chocolate cupcakes, each with a little ball of marzipan dropped into the batter–you know, a moon in the night sky.

But the marzipan moons sank, leaving the cupcakes looking a bit like bellybuttons.

After a year of daily food-related posts, I couldn’t resist sharing this.