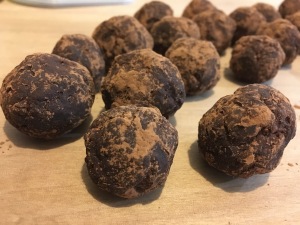 I like the idea of the now-ubiquitous protein balls/energy bites/bliss balls/whatever they’re called. I thought they’d be great for my athletic daughter, to keep her weight up.

But when I bought some, we found them more candy bar than energy boost—overly sweet and not particularly tasty, either.

So I was intrigued when I found the book, Energy Bites, by Christine Bailey in the cookbook section of my local library.

My excitement quickly turned to disappointment as I flicked past recipe after recipe that included such hard-to-find ingredients as xylitol, yacon syrup, matcha, colostrum powder, and lucuma powder. Surely, one should be able to concoct a not-too-sweet high-energy treat from ingredients I already had in the cupboard.

I pulled out my food processor and started dropping things in and buzzing them until I had a mixture of the right consistency and flavour.

The result was bitter with chocolate, rich with nuts, and just a little zingy with salt and cayenne. A definite improvement over the store bought ones, and easy to whip up with staples from my cupboard.