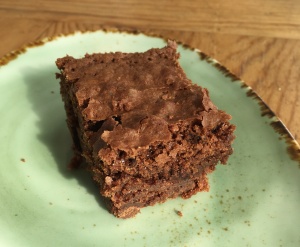 I wanted to bake brownies the other day. I had my heart set on my usual brownie recipe, with chocolate chips and walnuts added.

But when I went for the cocoa, there was none. Oh no!

But there was a large bar of really nice dark chocolate … I used the chocolate instead.

Then, we were almost out of walnuts. Darn!

Dried raspberries. When we dried them, I had no idea how I might use the crunchy little nuggets that resulted.

Now I knew exactly what they were for. I tipped the whole jar into the brownie mix, along with a generous quantity of chocolate chips.

The result is the most divine brownie I think I’ve ever made. The high-quality dark chocolate makes the bar decadently rich, and the dried raspberries provide sparkling, intense bursts of fruit flavour that lingers long after the last crumbs are eagerly licked off the plate.

Lucky thing I was out of cocoa and walnuts!