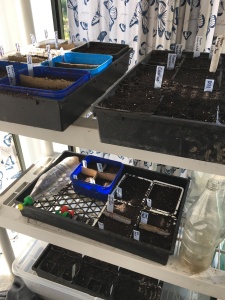 And so it begins…

It’s been nearly a week since my last blog post, but I have a good excuse—I’ve been working very hard, and have just finished the first draft of The Dragon Defence League, book 3 in my Dragon Slayer series.

Spring has crept into my office, though, in spite of my focus on writing. Over the weekend, I started my first seeds for the season: peppers, eggplants, herbs, brassicas, onions, lettuce and spinach. I’ve been writing in a greenhouse the past two days, with the smell of moist potting mix mixing with the smell of my morning coffee.

Next week I’ll add another batch of seeds to the office, and before long I’ll be hauling newly-sprouted seedlings out to the greenhouse. And not long after that, those seedlings will be ready to set out in the garden.

So much excitement in spring! And now a new book to nurture along with the plants!