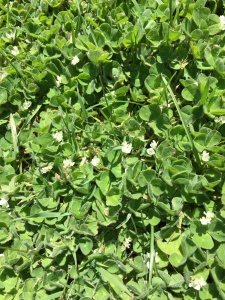 Subterranean clover (Trifolium subterraneum), like other clovers throughout the world, is an important pasture species. And it’s also a weed.

I’ve grown quite fond of ‘sub-clover’ as it’s often called. It’s much smaller than red or white clover, and the flowers form in clusters of only 2-5 in each head (as opposed to the large clusters that make up each ‘flower’ of other clovers). It also has the interesting habit of turning its flower heads downward after germination, so that the seed pods develop underground (hence, its name).

What I like most about subterranean clover is the thick mat of low-growing greenery it can produce, even in the dry rock where the old driveway used to be. Without it, some areas of the lawn would be bare year-round.

I also like the fact clover is a nitrogen-fixing plant. The clover in the old driveway is improving the soil for other plants as it grows and dies. With its help, grass might some day thrive there (though I’m not holding my breath).

Unfortunately, sub-clover dies. Dramatically. Just when we’re desperate for green. It’s a winter annual, meaning it sprouts with the autumn rain, grows through winter and spring, and flowers in early summer. When summer turns hot and dry, the plant dies, its life cycle complete. The lawn outside my office is composed almost entirely of sub-clover, so when it goes, it’s grim.

The only consolation is that the grass dies shortly after the sub-clover. Summer is simply brown here.

So for now I’m enjoying the lush greenery underfoot. It’s wonderful while it lasts.