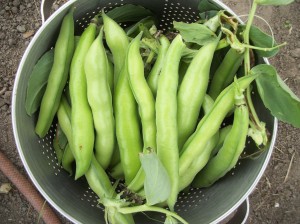 I had never eaten broad beans (aka fava beans) before moving to New Zealand, but now I can’t imagine early summer without them. They’re uncommon in the U.S., and even here where they’re grown by the hectare, they’re often considered “old people’s food”. During my brief stint selling vegetables at the Leeston market, I never sold broad beans to anyone under the age of 80.

But his attitude is unfair. Broad beans are more versatile than that. They have a bold, almost floral flavour that needs no embellishment. When young, the beans are sweet like peas, and they grow starchier as they mature. Somewhere between sweet and starch, they are at their best.

The “usual” way to eat broad beans is to blanch them, peel the skin off each bean, then serve them or cook them into a dish. Nothing wrong with that, unless you’re the cook, who has to shell and peel all those beans.

We prefer to make the consumers do half the work. We blanch the beans and serve them as finger food. They make a lovely appetizer—pop them out of their skins right into your mouth. Paired with a nice Sauvignon Blanc and eaten outdoors on a summer evening, they are no longer “old people’s food”. They become urbane and sophisticated. Something to be savoured with intelligent conversation.

And if you’re more the beer and burgers type, broad beans will oblige. They make a mean green burger that goes well with cheese, mushrooms and ketchup. Light enough for a lager, strong enough for a stout, broad bean burgers go with just about anything.