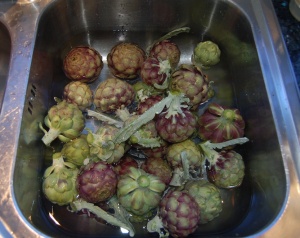 Just a few of the artichokes…

It’s artichoke season again, and we are officially overwhelmed. It’s no longer a question of whether we’ll have artichokes for dinner, but what we’ll have with them. I seem to have permanent spines in my fingertips from preparing them, and my fingernails are stained an unattractive grey from the purple ones.

But the spines and the stains are worth it. Having this many artichokes makes me feel like a queen—who else could indulge in such a luxury? (Never mind that a queen wouldn’t have to prepare her own artichokes.)

This weekend, if I can manage it around open homes, I’ll bottle (can) a year’s worth of artichokes. It’s nearly a full day’s work. Picking and prepping 60 to 70 artichokes in one go is daunting, but then we’ll have riches year-round, and all we’ll have to do is open a jar to get them. Not too hard to take.