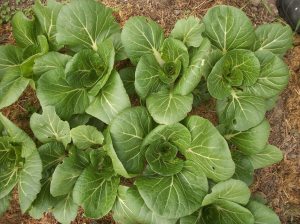 Pak Choi, also known as Bok Choi or Chinese cabbage, is another of the early brassicas we enjoy in springtime.

Pak choi is best as an ingredient in stir fries. Lighly fried, it is crunchy and nutty, a bit like cabbage. It also imparts a glossy sheen to all the vegetables in a stir fry.

Pak choi’s origins go back at least 2000 years in China, and it is usually used with oriental spices. But pak choi is versatile. We also use it in pasta and even on pizza (where it is odd, but not bad).

Like most brassicas, pak choi doesn’t like heat or drought, and bolts once things heat up in summer. So we enjoy it while it lasts!