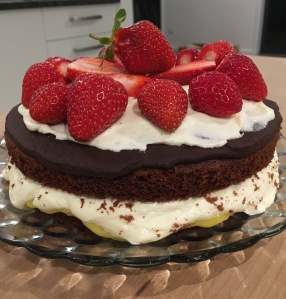 After my daughter’s octopus cake, the remainder of Crazy Cake Season has been less than crazy. My son’s cake was a bit of a do-it-yourself kit, and consisted of plain cupcakes and a tub of frosting posted to him, since he was back at university for his birthday.

Cake number three, for my husband, was a small affair, since it’s only the two of us at home now. I don’t think I’ve ever made a cake this small—it seemed hardly worth the effort when I pulled the single 18 cm round out of the oven.

I was particularly taken with the whipped cream filling, which came from CookingLight, and was easy to make:

Whip the cream and sugar together until stiff peaks form. Add the yogurt and vanilla and beat until smooth.

I had extra strawberries and was munching on them as I assembled the cake. In the process I discovered that the filling makes an amazing fruit dip. Worth making some extra, just for dipping strawberries into.