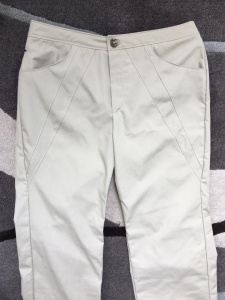 Last week I started making a new pair of trousers. Because I used a tried and true pattern, I didn’t test the fit until near the end.

That was a mistake.

I couldn’t zip them up, they were so small around the hips.

That can’t be, I thought. I’m still wearing the last two pairs of trousers I made with that pattern. What have I done wrong? They needed extra fabric in the side seams. But I’d installed a welt pocket over one of the seams, and I’d trimmed all the seam allowances—there wasn’t enough fabric there to let out the seams.

I thought about all the hours I’d put into them—how carefully I’d set the fly zip, how beautifully the welt pocket had gone in, how I’d only bought just enough fabric, how much I really needed a new pair of pants.

Thoroughly discouraged, I nearly chucked the garment into the bin.

I put everything away and made myself a t-shirt instead. Then I made a lovely button-down tunic with slightly quirky buttons. Then I sewed a new laundry bag.

Finally, I was ready to face the trousers again. There had to be a way to salvage them, if only I was creative enough.

I remembered my first pair of zip-off pants, in which I didn’t allow enough ease for energetic hiking. They’d had pockets over the side seams too. I’d split the legs right up the front and back from waist to knee and put in long triangular gussets that ended up looking quite sporty.

Maybe I could do something similar with these trousers. I drafted several inserts of various shapes. I didn’t like any of them, because they all destroyed the look I wanted. But the alternative was to throw the garment away.

With nothing to lose, I carefully sliced my beautiful trousers into pieces. I tried not to worry about why I’d made such a bad mistake in the first place, but to focus on making the fix as perfect as possible.

To my relief, the adjusted trousers fit. To my surprise, the inserts don’t look bad at all.

It reminds me of how far I have come since my youth—an easily frustrated 20-year-old me would probably have tossed those trousers in anger (in fact, I can recall doing just that to more than one garment). But I’ve learned that most mistakes can be fixed once I let go of the frustration and move on to the problem-solving. It’s probably a good lesson for the rest of life too.