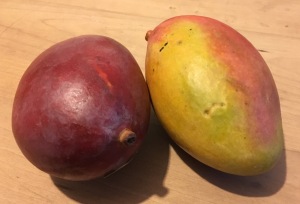 I have bought mangoes here in New Zealand only a few times in the twelve-plus years we’ve lived here. As you’d expect, they’re incredibly expensive and usually disappointing. Add to that the fact they couldn’t have more food miles on them unless you grew them on the moon, and it’s hard to justify buying them. There’s so much lovely fruit grown here, it seems silly to buy imported fruit that is little more than a shadow of what it should be.

But once in a while I can’t help myself. Last week, when I saw them for sale at four for $5, I simply had to buy some.

And for once, I wasn’t disappointed. It took a week and a half before they were ripe, and by then one of them was beginning to rot. But from the first cut of the knife, I knew they were going to be good.

From the first whiff of that pine-sap-and-peaches aroma, I was transported. Transported to Panama: to the tree-stump that served as a chair on our porch; to the bustling, smoky comfort of our friend Francisca’s kitchen; to a hot hillside knee-high in corn or beans; to the crowded dance hall wherever Sammy and Sandra Sandoval were playing, to evenings spent laughing with unexpected visitors who always showed up at dinnertime and stayed the night.

I cut up three mangoes and put them out with dinner. Each bite was a memory. A memory of warmth and light, of ant bites and muddy shoes, of hummingbirds and viudas, laughter and tears. I wanted to gobble it all down in an instant, and savour it for forever.

They were not the best mangoes I’ve ever eaten. Not by a long shot. But the memories were delicious.