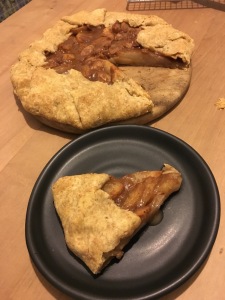 Several kilos of beautiful pears in the house inspired pear tart for dessert last night. Taking inspiration from a few recipes, I came up with the following. It was lovely!

Make your favourite pie crust recipe—enough for a one-crust pie. Roll the crust into a large round (about 15 in/38 cm in diameter) and place on a baking sheet.

Arrange the pear slices in the middle of the crust, leaving about 5 cm/2 in around the edge. Bonus points if you can make a pretty spiral, but it tastes the same either way. Pour any remaining juice over the top, then fold the edge of the crust up and over the pears.

**Pears are incredibly sweet, and though this tart was divine, I like a little tartness in my tarts. Next time I will add some grated lemon peel to the filling or serve it with yogurt.