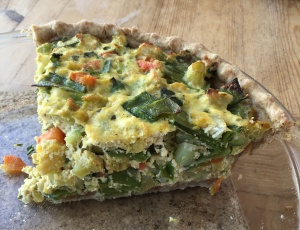 After decades of work, I finally did it.

I made a perfect pie crust.

A flaky melt-in-your-mouth crust that made this excellent ricotta and vegetable pie seem like just a prelude to the crust. Not a hint of toughness, not a moment over-baked or under-baked. Even the bottom, that tends toward sogginess, was perfect.

That’s it, now—I’ve accomplished that and can tick it off my list. I never need to make another. I’ve done it right, and that’s that. My last pie crust.

And, if I’m being honest, this perfect crust came about in part because I was being a bit lazy.

My pie crust recipe (designed to create an American pie crust with NZ ingredients), is supposed to be made with 125 grams each of butter and Olivani. But today there was a 150 gram chunk of butter in the fridge. I didn’t feel like cutting off a 25 gram sliver, so I just used it, and reduced the Olivani to 100 grams.

The other part of the perfection of this crust was a 45-minute chill in the fridge after rolling it out and putting it in the pan. That chill was necessary, simply because I was cooking alone today, and it took 45 minutes to pick, prepare and cook the vegetables after I finished the crust.

I really wasn’t aiming for perfection (my usual crust is actually pretty good, so I tend not to mess with the recipe much), I just stumbled upon it by accident.

I have, however, made a note on my recipe to increase the butter to 150 grams and chill for 45 minutes…