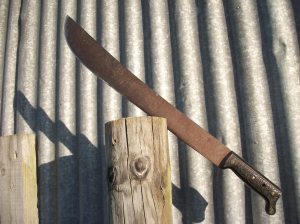 I learned to use a machete in Panama, where it became an extension of my arm. I learned my macheteing technique from greats such as Julián Valdéz and Onofre Gonzales. Not having been born with a machete in my hand as they were, I could never match their skill, but by the end of my two years, I could at least keep pace with a crew clearing brush for a new crop. Of course I could only do this because I’m ambidextrous, and when my left arm gave out, I could switch to the right. But, hey, that meant I was at least half as good as the farmers around me!

In rural Panama, a machete may be the only tool a farmer owns. It’s used for everything from taking down trees three feet in diameter to paring one’s toenails. Machetes are kept razor sharp, and if a farmer isn’t using her machete, she’s probably sharpening it. All that use wears them down. As a machete grows smaller and smaller, its use changes—from land clearing, to weeding tool, to kitchen knife. The smallest ones are given to little children, who proudly toddle around with machete in hand—able to help around the farm now they have a tool.

When I left Peace Corps, I sadly had to leave my “Collins”* behind—it was Peace Corps issued, and went to the next volunteer in my village. But I couldn’t live long without a machete, and soon had another upon my return to the United States. Actually, we had three…size is critical, and you have to get just the right one, so my husband has a long one, and I have a shorter one, and we have an even shorter one that fits neither of us well, but is useful for edge-destroying activities.

Those machetes came to New Zealand with us when we moved, and they are as useful here as they were every other place we’ve lived, though they get odd looks from the neighbours.

Here in the developed world, the machete is an anachronism of sorts. Its jobs are done by petrol-powered weed whips, chainsaws, saws and secateurs.

But there is something satisfying about a tool that can do just about anything. A tool that never breaks down, doesn’t need fuel, and requires only simple maintenance—sharpening—easily done with a file or even a chunk of concrete.

And of course, as the forerunner of the sword, a machete comes in handy if you happen to come across a dragon in the garden…

*Collins is a favoured brand of machete in Panama.