The potting bench in better times…

I suddenly realised today that tomorrow is the first of August. That means just two weeks until I start planting seeds for the vegetable garden!

That unalloyed excitement lasted a whole ten minutes, until I stepped into the garden shed.

It’s a scene of utter destruction. All through the autumn and winter, I’ve been walking in, tossing something on (or in front of) the potting bench, and then walking out.

Yeah, yeah…I’ll deal with that later…

I have two weeks to whip the shed into shape, or I won’t be doing any planting on the 15th of the month.

A standard egg at the supermarket weighs 53 grams, large eggs are 62 grams and jumbo eggs are a massive 68 grams.

My new chickens just started laying yesterday, and I smiled at the tiny eggs they laid.

Then I weighed them—far from being tiny, they weigh as much as a standard egg.

Turns out the ‘normal’ egg from my chickens weighs 80 grams or more (I had a 92 gram one last week—I know because it looked big, even to me, so I weighed it).

I’ve known this for some time. My eggs are bigger than the eggs called for in your average recipe. I can usually skimp on the number of eggs I use, with no repercussions. It comes in handy in wintertime, when egg production is down, and I’m often rationing eggs.

But I hadn’t really quantified it before. So, doing the maths, if a recipe calls for four large eggs, that’s 248 grams of egg. Just three of my 80+ gram eggs will do, in that case. That matches my experience with skimping on eggs in a 4-egg cake. In recipes that call for three eggs, I can probably get away with two. Start looking at a genoise cake that may call for 7 eggs, and I should really be using closer to 5.

I can’t tell you why my chickens lay such enormous eggs. I assume it’s a combination of genetics and diet. Coming from the same breeder, I expect my new ones to eventually lay 80 gram eggs, like the older ones do. But if they don’t, that’s just fine. Truth is, those super jumbo eggs don’t fit very well in the egg holder on the fridge door. Sometimes, when I open the fridge, an egg flies out to splat on the kitchen floor. I wouldn’t mind non-ballistic eggs.

Check out my interview with the Christchurch Writer’s Guild. Where I reveal all my secrets…or not. 😉

I’m excited to announce the upcoming release of Backyard Bugwatcher. This kid-friendly book includes all the cool information and identification keys from Insects in the Classroom. A great addition to any bug-lover’s library, this guide complements insect guides like Which New Zealand Insect? and Life-Size Guide to New Zealand Insects, giving you additional background information on a broad range of New Zealand arthropods, and providing keys that can help you learn to quickly categorise creepy crawlies for identification.

Contact me to order your copy, or order on Amazon.com

Some days you just have to be silly.

Half way through cooking yesterday’s dinner, I felt it was incomplete. It need a little something extra. Something light and fresh. By the time I thought this, it was already dark outside. I didn’t feel like picking a salad in the dark, so I thought I might make a fruit salad.

But neither the bananas, nor the pears in the fruit bowl were ripe yet, and that left just apples and mandarines. Pretty boring fruit salad.

How could I make plain old apples exciting?

Turn them into swans, of course!

I found instructions for these fun little fruit birds on the Curious Little Kid blog. Hers are much prettier than mine, but mine got a laugh at the table all the same. They turned boring apples into an exciting side dish.

Last weekend we were hit by a major winter storm. The weekend before, another storm dropped snow almost to sea level. A third storm is forecast to blow in over the next couple of days.

But John Snow needs to change his tune.

No question about it.

The plants have felt it.

The birds have felt it. 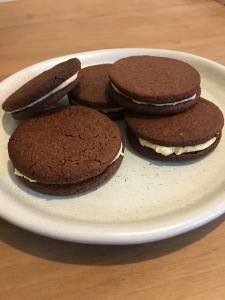 But yesterday I had an idea. What if I turned those same cookies into homemade Oreos?

I took my ice cream sandwich cookie dough and, rolled it out a bit thinner than I do for ice cream sandwiches. Instead of cutting it into rectangles, I cut circles with a cookie cutter. I baked them for 8 minutes at 190ºC (375ºF), and then let them cool completely on a rack.

When cool, I stuck them together with the following icing:

Beat butter and Olivani until smooth and light. Add vanilla and beat thoroughly. Sift confectioners sugar over the butter mixture and beat until smooth.

The icing was too soft at first and tended to squeeze out of the cookie when we bit into them, but it hardened overnight into the perfect Oreo filling consistency. I found this quantity of icing perfect for the number of cookies, but if you like double-stuff Oreos, make twice as much filling.

It has been decades since I last ate a real Oreo cookie, so I can’t say whether they are exactly like Oreos or not. But they are FANTASTIC! 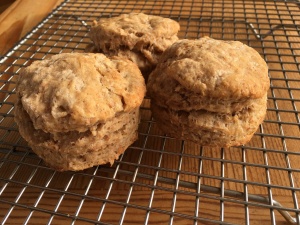 The line between biscuits (in the American sense of the word) and scones is a blurry one—add an egg and little sugar to a biscuit and, hey presto, you’ve got a scone! Take away the egg from a scone and, voila, you’ve got biscuits!

This morning, wanting scones but facing an egg shortage, I found myself improvising. The biscuit variation I came up with was absolutely marvellous, particularly when eaten with a dollop of honey.

This is a giant Sunday morning quantity of biscuits—enough for breakfast for four, plus extra snacking through the day. Easily halved, if you’re not feeling like Sunday decadence.

Combine all dry ingredients in a large bowl. Cut butter into the flour mixture until it resembles coarse meal. Stir in milk. Briefly knead dough, just until smooth. Roll to 1.5 – 2 cm (1/2 – 3/4 inch) thickness and cut into squares, rounds, or whatever biscuity shape you like. Bake on an ungreased sheet at 210ºC (425ºF) for about 15 minutes, until browned.

Never mind it’s been raining heavily since 2 am, and the garden is half underwater. The seeds have arrived! I can sort and file them, plan where they’ll go in the garden, and dream of sun-warmed tomatoes as enjoy a cup of tea by the fire this evening. 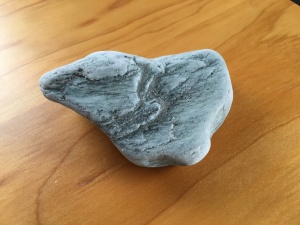 You sit in my hand and tell me stories.

I am not as I appear

Stories of ice and fire.

My colours fade here, away from my home

Stories from deep within the earth.

Stories of heat and pressure,

Violence tore at my very structure, squeezed me until I wept

My tears still glisten, and trace my scars with brilliance

A condensation of minerals,

I glow with the translucence of accumulated stress

The story of your journey from crucible to mountaintop.

The angles of my fractured existence plain upon my face

The story of your tumbling fall to the sea.

My pain worn smooth from repetition

Tell me your story.

Slowly giving up my identity to the sea