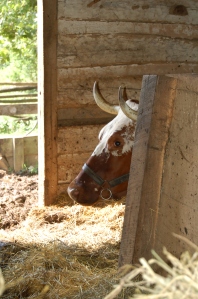 I always liked the early morning, before dawn. It was quiet. The kids weren’t clamoring for attention and hot chocolate. My husband wasn’t enlisting me in the frantic search for his car keys. The phone wasn’t ringing. Even the birds were quiet.

So it was natural, when we moved to the old farm out on Creamery Road, that I would tend to the livestock in the wee hours before daylight.

We kept a handful of dairy goats and a grumpy old steer named Bill, who came with the place. He’d run wild in the back forty, and only came down when winter set in, after we’d been there for six months. My daughter befriended him, and that’s how a family of vegetarians ended up with a beef cow.

But the cow wasn’t the only unusual thing that came with the property.

I saw the first ghost on an icy morning shortly after Bill arrived. We had made room for him in the barn alongside the goats. When I arrived in the barn that morning, I found Bill idly chewing an old wool blanket he had managed to reach from his stall.

“Are you taking lessons from the goats?” I asked him as I pulled the blanket away from him. I was about to toss it back into the corner when I saw the spinning wheel it had been covering.

The wheel was dusty. I wondered how many years it had sat in the barn, unused. I blew the dust off and tried turning the wheel with my hand.

“Use the foot pedal.”

I nearly jumped out of my skin at the sound of a woman’s voice. I looked up and there she was—a young woman in a long brown dress and white pinafore. She was clearly visible, but insubstantial, as though the dust had coalesced to make her form.

“The foot pedal.” The woman pointed. “That’s what makes it go.”

I pressed the pedal and the wheel turned. I smiled.

“Was this yours?” I asked. The woman nodded, smiling.

“My husband ran two hundred sheep. I always kept back some of the fleeces—the best ones—for our own use. I had a loom, too, but it’s gone.”

“What did you make?”

“Dresses and trousers, jackets…and blankets and booties for the baby.” An insubstantial tear rolled down the woman’s ghostly face.

“The baby died?” I guessed.

“No. He lived, and grew up to be a fine man, but I never got to hold him or help him on his way. His first breath was my last.”

I took the spinning wheel into the house, cleaned and oiled it, and put a new drive band on it. I bought some wool and asked the neighbor to teach me to spin. The young ghost visited whenever I sat down to the wheel.

The next ghost appeared in springtime. The goats were out in the far paddock with their new kids, and I was coming back through the woods from an early morning visit to them .

She was an elderly Native American with deep laugh lines around her eyes. She beckoned me off the trail and showed me a patch of morels pushing through the leaf litter.

“I used to collect morels from this very spot. I taught my daughter how to find them, and she taught her daughter.” Her face clouded. “And then the White Man came. Before long, there was no one left to teach.”

I picked the mushrooms, and have done so each spring since, savouring their earthy flavour in springtime meals.

Once I saw the first two, the other ghosts were easy to see. There was the boy floating sailboats on the farm pond—I taught my daughter to do the same. There was the doctor picking dandelion greens to nurse an invalid back to health—we began adding dandelions to our spring salads. There was the farmer building rock walls between fields—I added many stones to them over the years.

Everywhere I turned were the ghosts of those who had come before. My early mornings became a social time. I would greet the elderly man who milked his ghostly cow next to me as I milked my goats. I would share a joke with the girl who giggled in the oak tree. I would stop to hear a poem by the woman who sat writing on a mossy rock in the woods.

Bill is long gone. My kids have grown and moved away. My husband is buried in the churchyard in town. The ghosts stay with me all day now. They sit by my bedside when I wake in the night in pain.

I have claimed the milking stand as my own, when the time comes. The old man and his cow will have to make room for me.